28mm gaming is not new to me. Before I moved to Vancouver the game I played most by far was Mordheim. As a skirmish game, Mordheim has the advantage of requiring little space and few miniatures to play: a 4'x4' table and 10-15 figures a side is plenty for a good game. After a long love affair with 15mm gaming in the form of Flames of War, I wanted to try some WW2 gaming at a larger scale. Thus, my recent project of painting up enough 28mm figures to do some skirmish-scale WW2 gaming.

The most difficult part of adopting a whole new scale, for me, is building up the terrain needed to fill a table. Some of the terrain I built for FoW can be re-purposed, like hills, hedges, trees, etc., but the (very nice) Tigerterrain buildings I have for 15mm obviously aren't going to work. The Mordheim box comes with a set of fairly nice plastic-and-card buildings, and they work well enough as a bombed-out French village, but I was coming up to the end of the miniatures I had to paint and I spotted the Ruined European Village made by Precision Model Designs for sale at Battlemart, so the time seemed right to start a new project.

The photos of the set on the PMD website look nice enough, with smashed roofs showing the rafters beneath, and detailed flooring that's more than just a single flat sheet: you can actually see the joists and subflooring. Nice!

How do the models stack up to the promo photos? Good in some ways, not so much in others.

First, the good: the models really are nicely detailed, with realistic broken timbers sticking out all over, bullet and shell wounds in the walls, and nicely weathered stucco showing brick beneath. As I mentioned above, I appreciate the floors having actual depth, showing off the guts of the building that are exposed when it gets damaged. 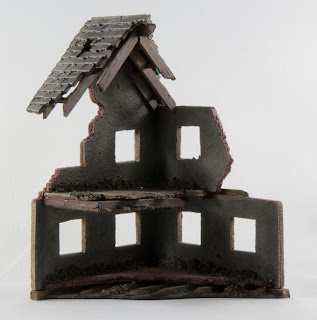 Most importantly, when the building is painted and detailed, it really does look quite nice. I had a happy accident when painting the stucco on the outside of the building: I put on way too much dark wash, decided it was going to look terrible, and dabbed most of it off with a paper towel, resulting in the nice mottled appearance I ended up with. 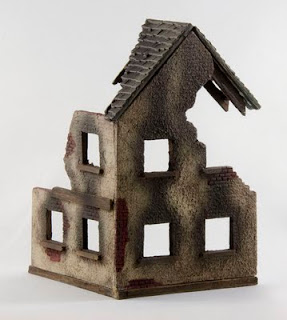 And finally, there is a lot here. The set really does provide a smallish ruined village, with several buildings and parts of buildings, a well, and tons of rubble. 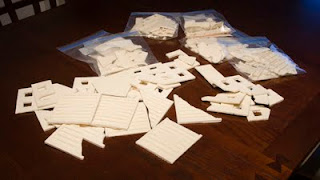 Now for the parts I wasn't so happy about. First, the casts all seem to have been poured into flat molds, with the result that there is always one side of the molds that is a flat, often bubble-filled, expanse of unmolded resin. This isn't a problem for something like the bottom floor piece, but when it's a wall section, that means the inner wall surface is flat and glassy. I dealt with the issue by spraying the detailless sections with textured spray paint before priming them, but adding random spackle to a surface isn't the same as having actual detail there.


Next, many of the castings look as though they weren't filled all the way with resin - they have a lip or rim around the edge that's thick, and then they get much shallower in the middle (ie, there's a meniscus [thanks, high school chemistry class!]). For each piece I've had to spend quite a bit of time cutting and filing the edge down so it matches the rest of the piece:


Third, the rafters have the opposite problem. It looks like the mold was overfilled, and I'm left with huge amounts of flash to clean up. In the photo it looks like thin, flimsy resin that could be easily cut away, but some areas were thick and really hard to remove.

Also, in this photo, you can see another problem that plagues a lot of the pieces: bubbles. There are both "negative" bubbles, as in air bubbles in the molds where there should be resin, leaving a space, and "positive" bubbles, big blobs of resin that have to be cut off the pieces.


Finally, and most annoying, a lot of the pieces are significantly warped. This means that the walls don't all fit together properly, and the ground pieces don't sit flat on the table. This is bad news. The buildings are hard enough to assemble as it is, with fairly narrow points of contact between the pieces for the glue to glom onto, and having a first-floor wall curved, while the second-floor wall that's supposed to sit atop it not curved, is pretty annoying.

So how do I feel about the kit overall? Basically positive. There are a lot of flaws in the casts, but, aside from the warped pieces, they are all things I can deal with. The problems aren't deal-breakers, but they do add a lot of work to get to a point where I'm happy with the models. Maybe I've been spoiled by the amazing Tigerterrain buildings I got before the guy stopped making them, but the casting quality of the PMD buildings is pretty shabby in places. That said, the detail is nice, and the set is quite reasonably priced for what you get. 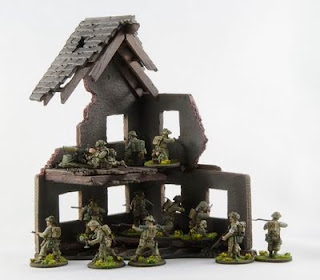