I hosted a game of Disposable Heroes at the last Trumpeter Society meeting on June 1. We played a scenario from Iron Ivan's scenario book on Market Garden.

The game went fairly well, but seemed to be largely decided by dice rolls. The Germans were also caught out in the open by a Para ambush, and a whole squad was wiped out... bad news for a force that only comprises two squads plus support!

Special thanks to Thomas Robson for helping me muddle my way through the rules. The rules are quite simple to use and seem like a good choice for club games, but I had a few quibbles. There is no provision for fog of war or command and control, which really eliminates any sense of reconnaissance or suspense. Aside from the single ambush, which is not dealt with especially elegantly in the rules, there is no suspense or surprise.

So, I'm still undecided whether DH or Troops, Weapons and Tactics are going to be my rules of choice. Or possibly some frankenrules stitched together with parts of both.

Anyway, on with the interesting part: the photos! 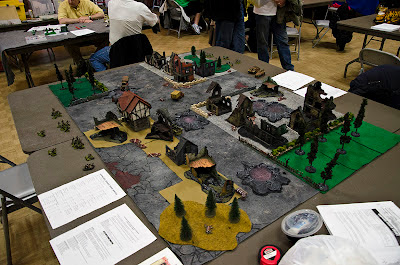 The calm before the storm: Paras may deploy in any building or wood on the board, and the Germans enter from the north street (the street at the end of which you see them parked, awaiting their turn) 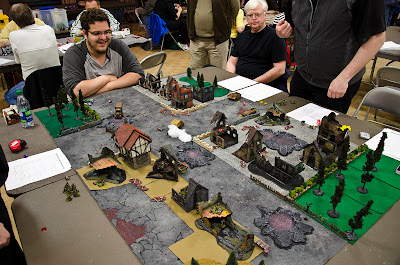 Several turns in, and not a lot has happened. The Paras have laid a small smoke screen in the centre of the board, and the Germans have all advanced onto the board, but don't get far before they start trading fire with the Paras. 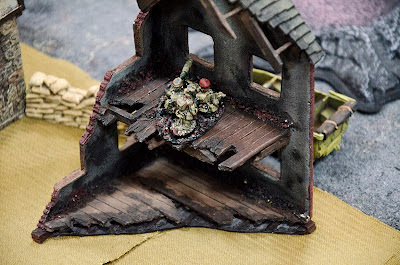 The Paras' Vickers MMG sprays lead at the Germans as they try to advance through the buildings on the East side of their entry street. 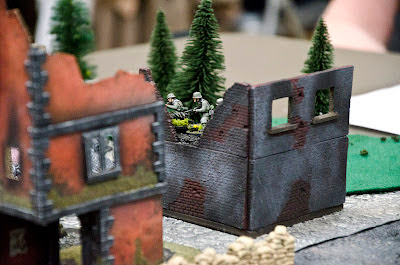 On the West side of the street, Germans occupy the buildings and make some cautious advances towards a British fire team in the South-West park. 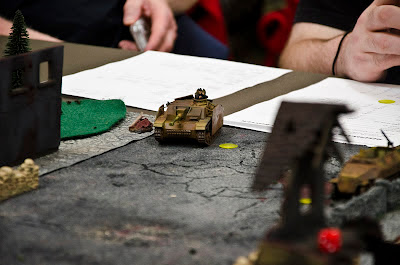 The StuG only ever got this far onto the board, then spent the rest of its turns trying to get acquisition on the Paras' Vickers. It finally achieved acquisition, but to very little effect. I think I may have been using the wrong stats for the StuG, but it likely would have made very little difference to the game, considering how long it took to get its bearings, and that the deciding fights were happening elsewhere. 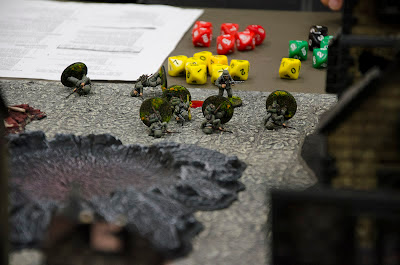 Massacre in the courtyard! The Paras' ambush team deployed in the building fuzzily visible on the right of the photo as the Germans tried to run across the open space of the courtyard, and absolutely reamed them, then moved on to the Germans' HMG, wiping them out as well.

By this time, the game was pretty much decided. A German team and a Para team destroyed each other in the West, but by this time it was pretty clear that the Germans would just be throwing their lives away if they continued pursuing the advance, and they withdrew.
Posted by cam at 20:24