I painted a couple of captured French tanks pressed into German service for this month's game at Trumpeter. They are resin tanks from Bolt Action, and they were super simple to assemble and paint: 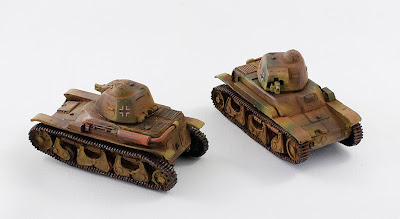 I ran into the same problem I've had with several of the vehicles I've painted, namely overdoing it somewhat with the weathering powders, and then being unable to clean them off. The tanks look a bit better in these photos than they do in real life, where the camouflage is almost hidden beneath the dirt.
Posted by cam at 21:21