A while ago I spotted a really cool steampunkish miniature that I wanted to get for In Her Majesty's Name. It was from a studio in Poland called Micro Arts Studios and, since I was ordering a figure from all the way in Poland, I figured I might as well make a proper job of it and get a bunch. Happily, my new minis arrived (just 10 days after ordering them) before Christmas, so I had something to play with while I was away visiting family.

Aside from the miniature that originally interested me in the Micro Arts Studios stuff (which I didn't actually get painted this Christmas...) I ordered essentially all the female figures from their different lines. I wanted to have an all-ladies adventuring team, and the minis from Micro Arts provide a really broad range of different types to work with.

The basic idea behind the team is that they are the wives of influential men who were entirely fed up with the limited options available to women in Victorian society, and so have formed a "Benevolent Society" to hide their real activities: fighting, adventuring, and travelling. I considered painting a zorro-type mask on each lady to help hide her real identity, but I'm pretty happy with how they look now and I'm not sure I want to commit to messing up their faces. 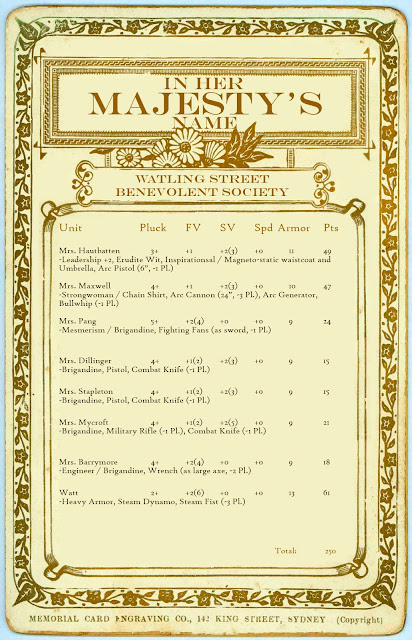 And the individual members: