I had a blast this year again at the Trumpeter Society's Salute convention! Huge kudos and thanks are due to the volunteers, game hosts, and vendors who work so hard to put the convention on every year - their efforts really show. We had a full roster of games and healthy attendance, so there were a lot of happy and satisfied gamers at the show this weekend. 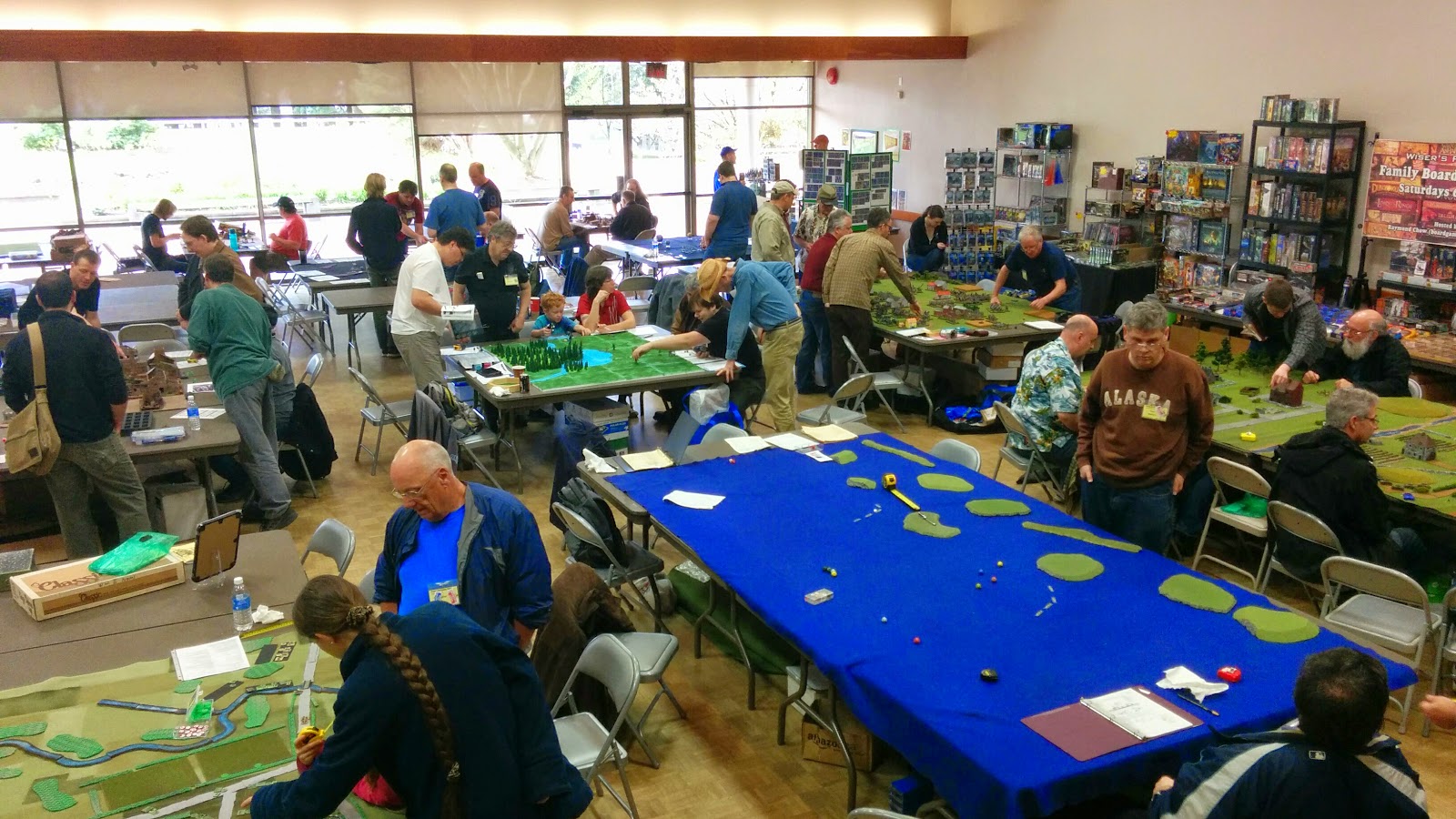 I was able to attend the Friday night session and all day Saturday, which means 4 game sessions. I only missed out on Sunday. There were a lot of games registered in which I was interested, but after so much on Friday and Saturday I needed Sunday to recover.


Friday night, Grace and I participated in an All Things Zombie game that took place during the Russian revolution.I was keen to play a game of ATZ, because I've heard about the rules many times and there are other Two Hour Wargames games that I would like to check out sometime, so this was a good 'taster' for the rules.

Each player had control of three characters, except one (one of the hosts who was participating in the game) who had a light tank. We all started on one side of the table and approached a village that was suspected of harboring a team of rogue scientists working on some secret project.

With six players, plus programmed zombies, the game was a bit slow-moving. Most of the slowness comes down to the rules themselves, which are so chart-heavy they are in danger of collapsing under their own mass into a chart singularity. My only experience with a THW ruleset was when I tried playing Nuts! several years ago, which ended in pure frustration. After having played ATZ, I feel a bit better about being unable to puzzle out the finer points of Nuts - even the hosts seemed to struggle to figure out what the rules mandated in certain circumstances.

Clunky rules aside, the hosts did a great job of providing a fun game, and we managed to clean up most of the zombies - though having a noisy tank rumbling around in the village didn't help. 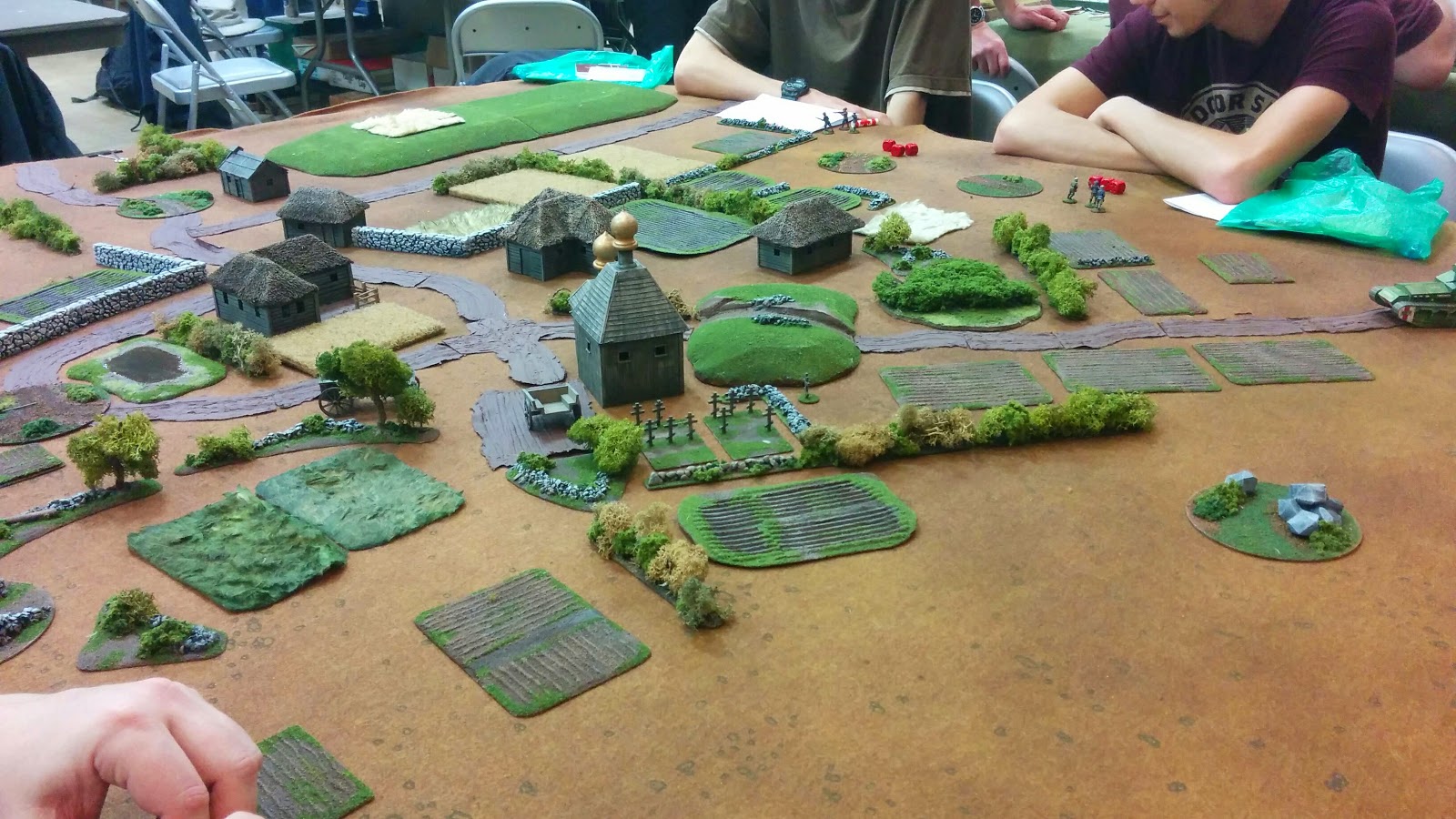 At one point we encountered a band of Whites. As a Kommissar of the reds, they were my political and ideological enemies, but I was the one who discovered them, and I had a chance to form an alliance of convenience so that we could work together to control the zombies. Unfortunately for the cause of peace, one of the attributes I rolled for my Kommissar at the beginning was 'Dim', so I decided to role-play him appropriately and opened fire on the Whites. At this point I had left my sole bodyguard behind (the other one had been bitten and had to be euthanized for the good of the Party), and when they returned fire I had to duck back into some nearby bushes. 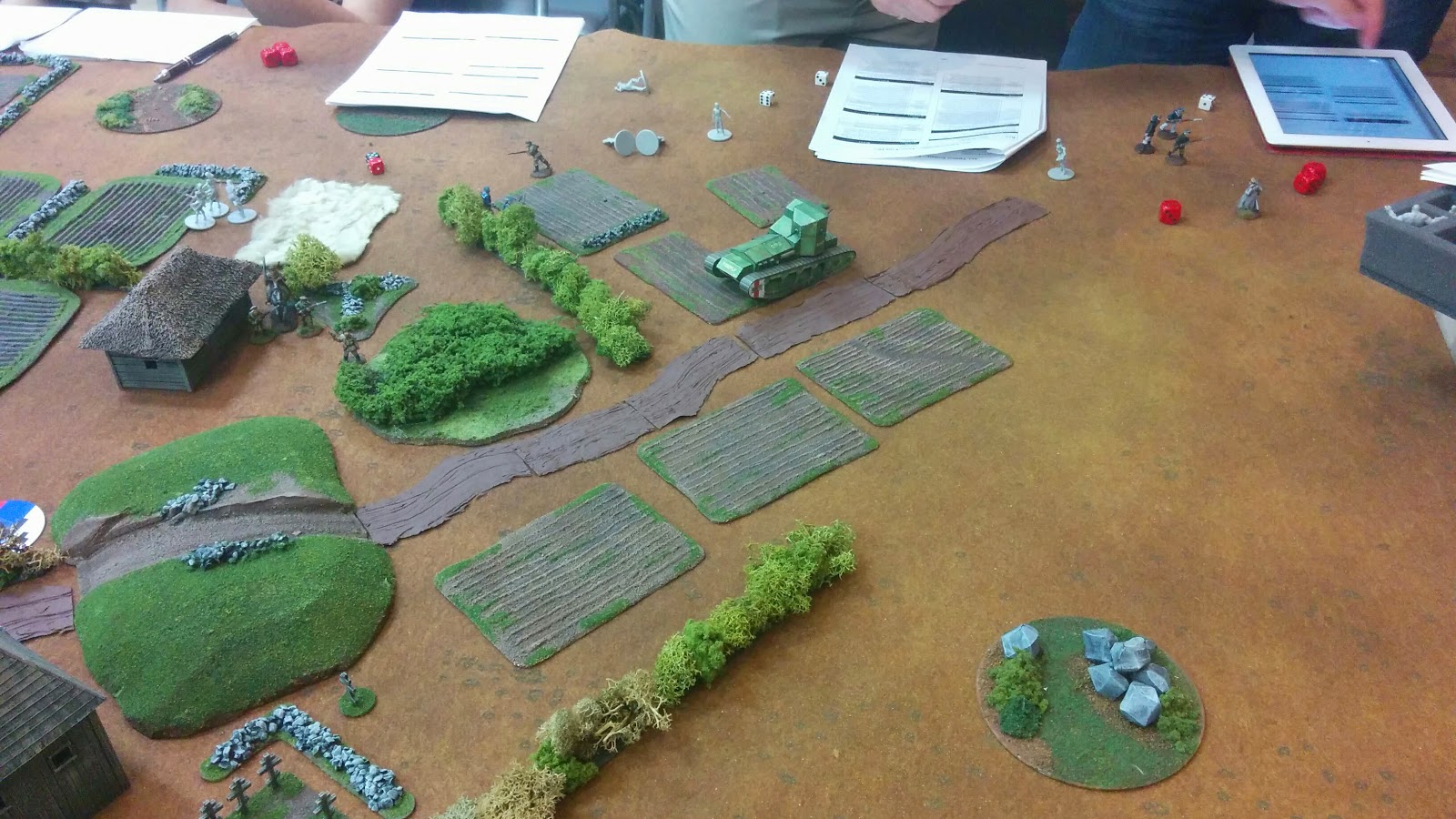 By the end of the scenario, we had searched all of the buildings except the church, but things were looking pretty good for the humans, so the hosts declared it a victory for the living.

Huge thanks to Martin, Tony, and Brian for setting up the game and helping us noobs along!


Like last year, I hosted two games. This time it was two sessions of Saga, using the 2x2 terrain board I built last summer and the scenario I developed to go with it, during the Saturday morning and afternoon sessions. The game was well received, and I had full rosters for both sessions with people on the waiting lists, as well as lots of people who came by to check it out. I also won Best In Show for the Saturday morning session, which provided me with a certificate to spend at the Imperial Hobbies booth - more on that later.

I took some photos during the session, but I can't do better than the battle report that David wrote after the second game. You can find it at his blog - Google Translate does a good job, if you don't speak French. 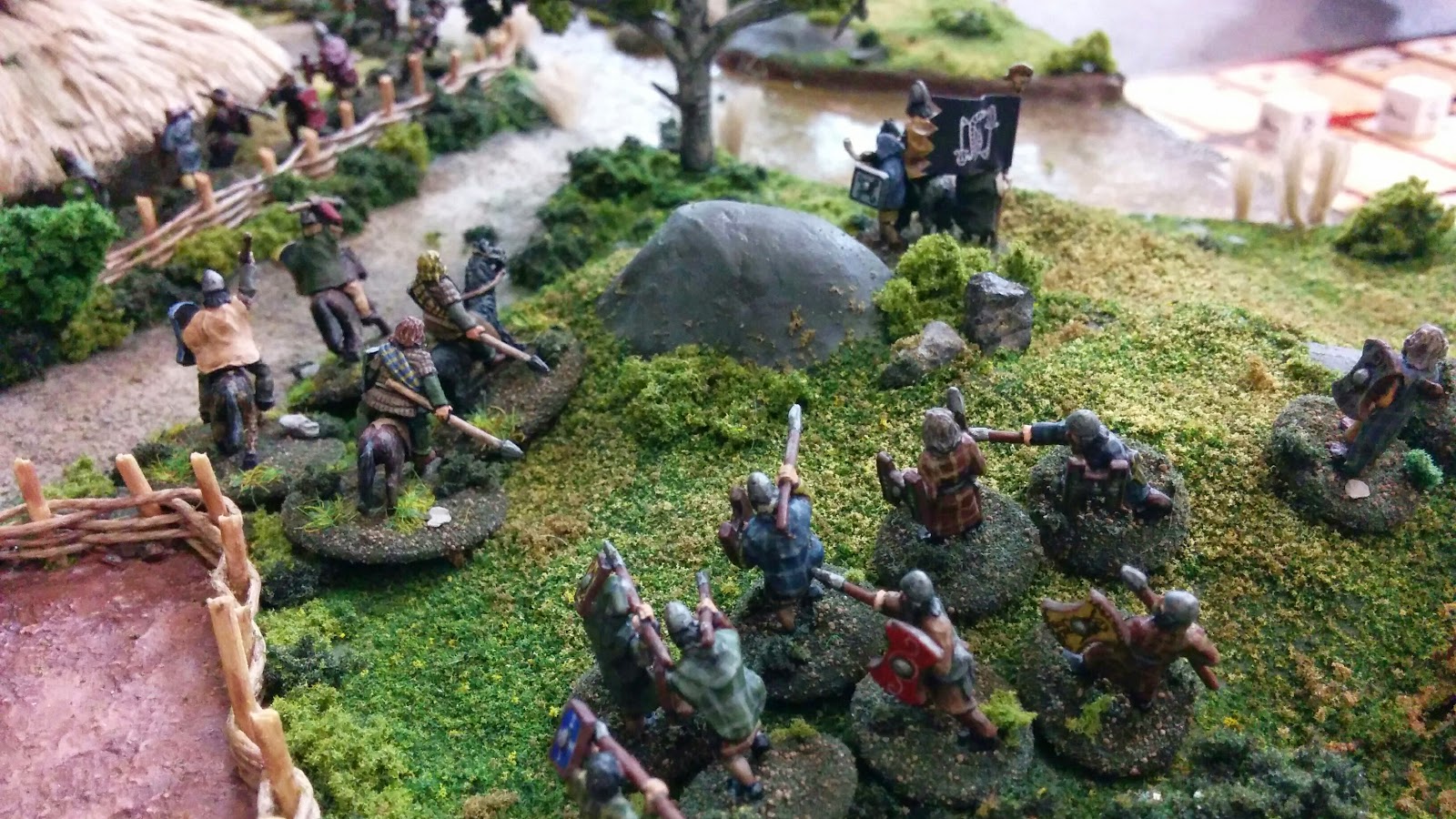 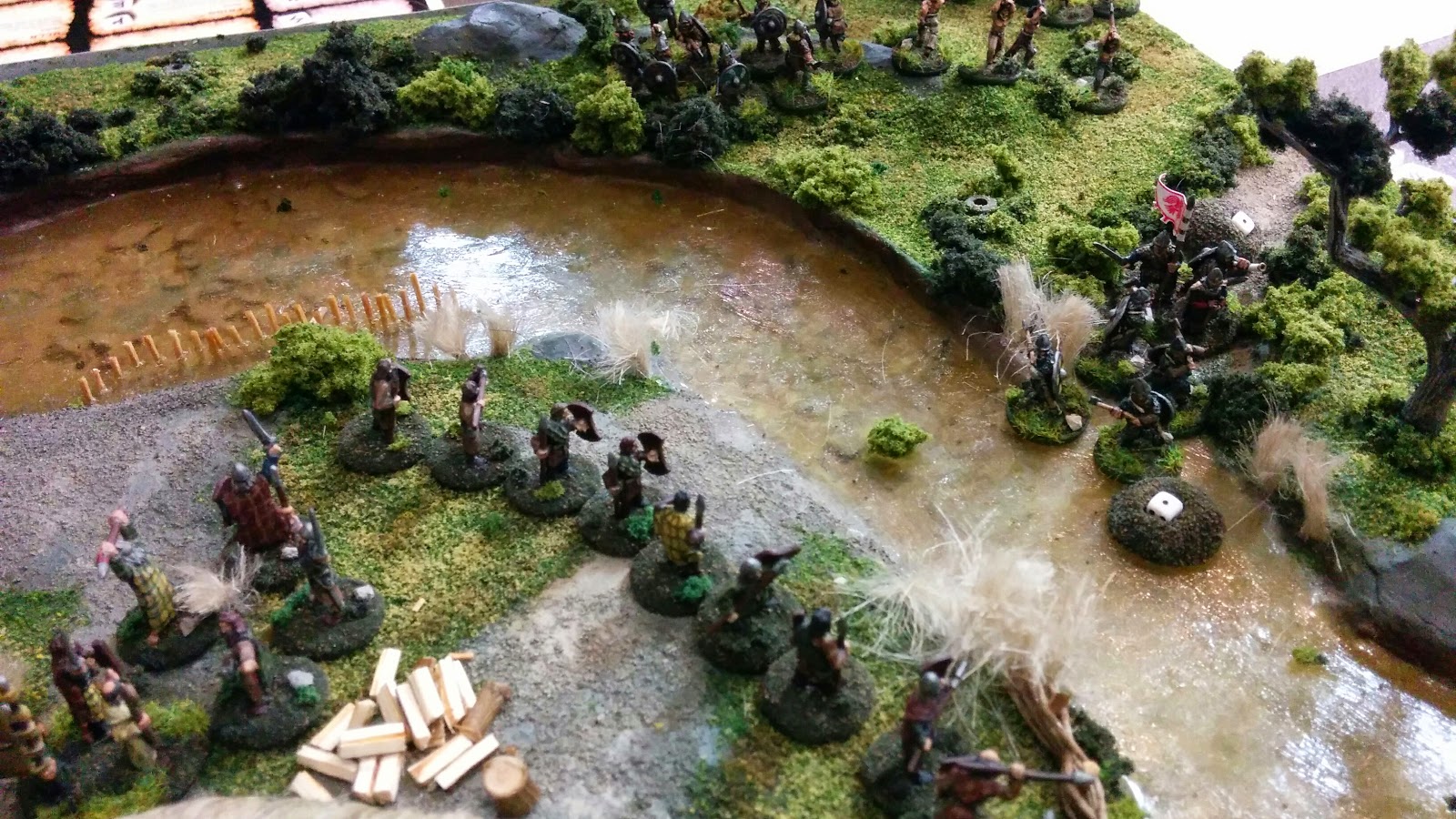 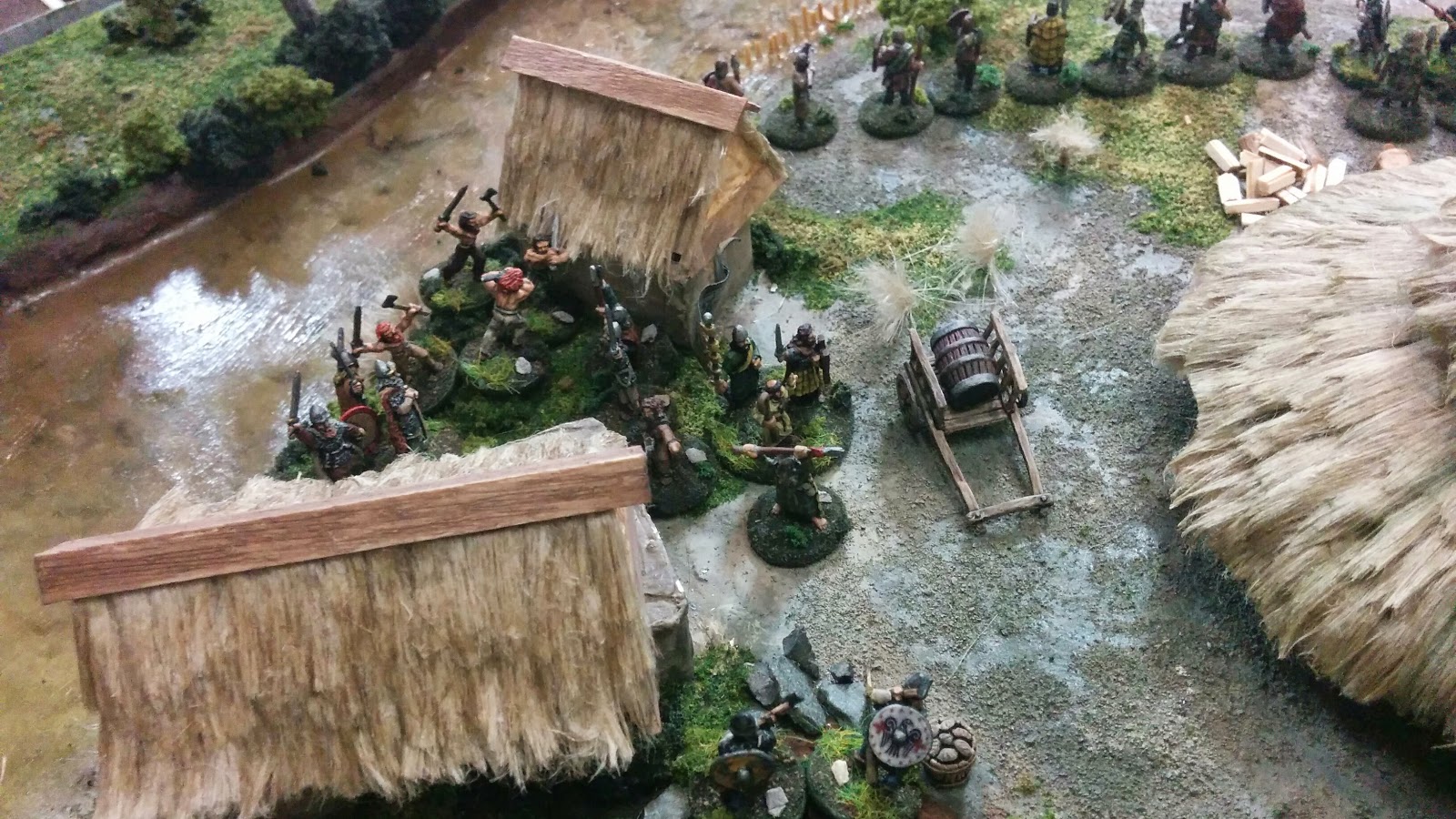 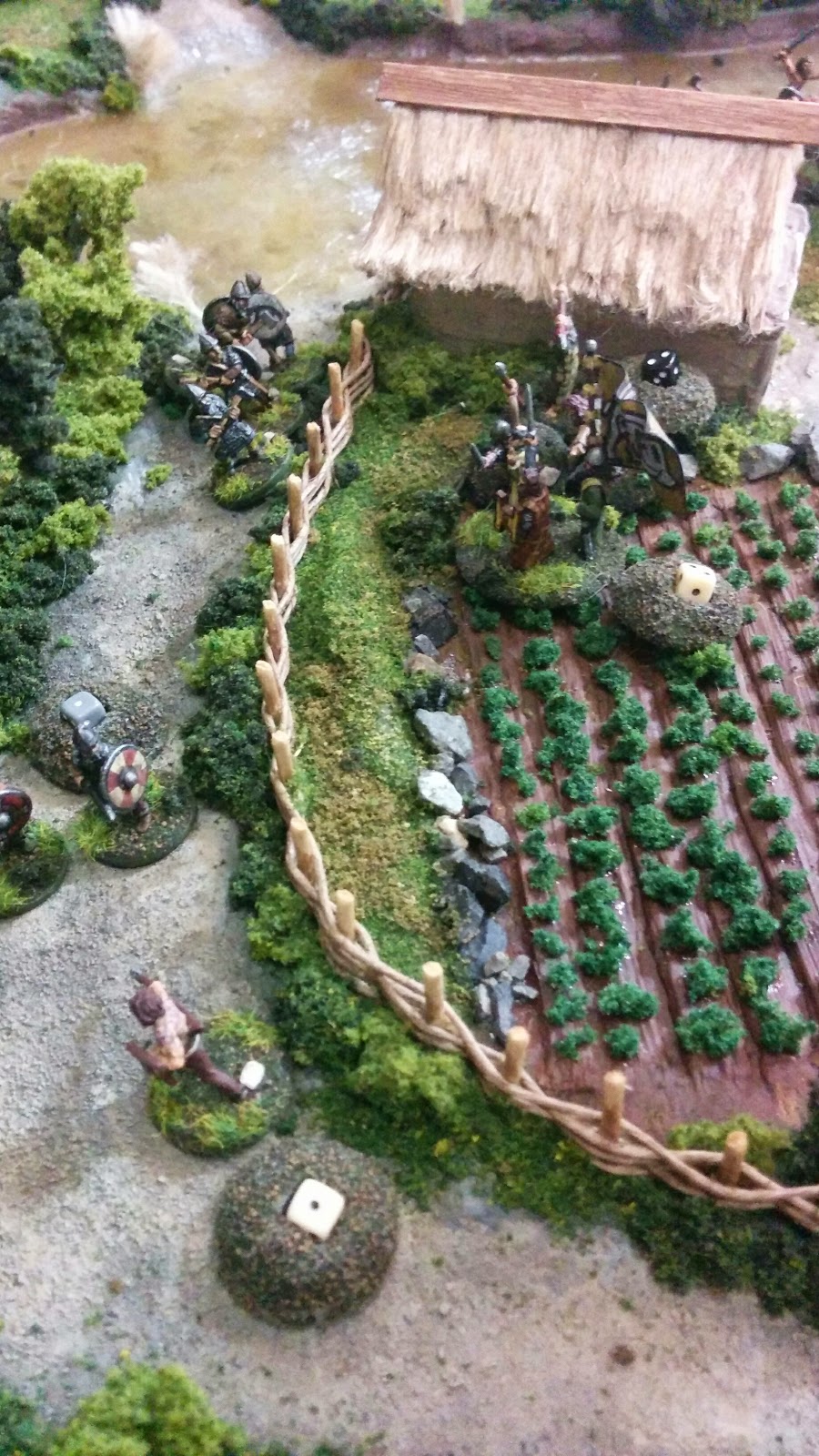 All of the players did a great job and were very gracious and patient in learning a rule set that doesn't lend itself very well to just picking up and playing, and Grace was a huge help in offering rules clarifications and advice to the players through both sessions.

At the end of the day there was a great deal of courage, cowardice, carnage, and arson, of which great Sagas are made.

I had hoped to return to Brian's Russian Revolution table on Saturday to try out Chain Of Command, I ruleset I own but which I have never yet played, but the roster was already full by the time I finished packing up my Saga game and eating dinner. So I decided to join Dave and Bryan at their Axles & Alloys game, a set of rules with which I'm pretty familiar. Grace even brought the school bus I painted for A&A to play with - I just used the cars that Dave and Bryan had available. 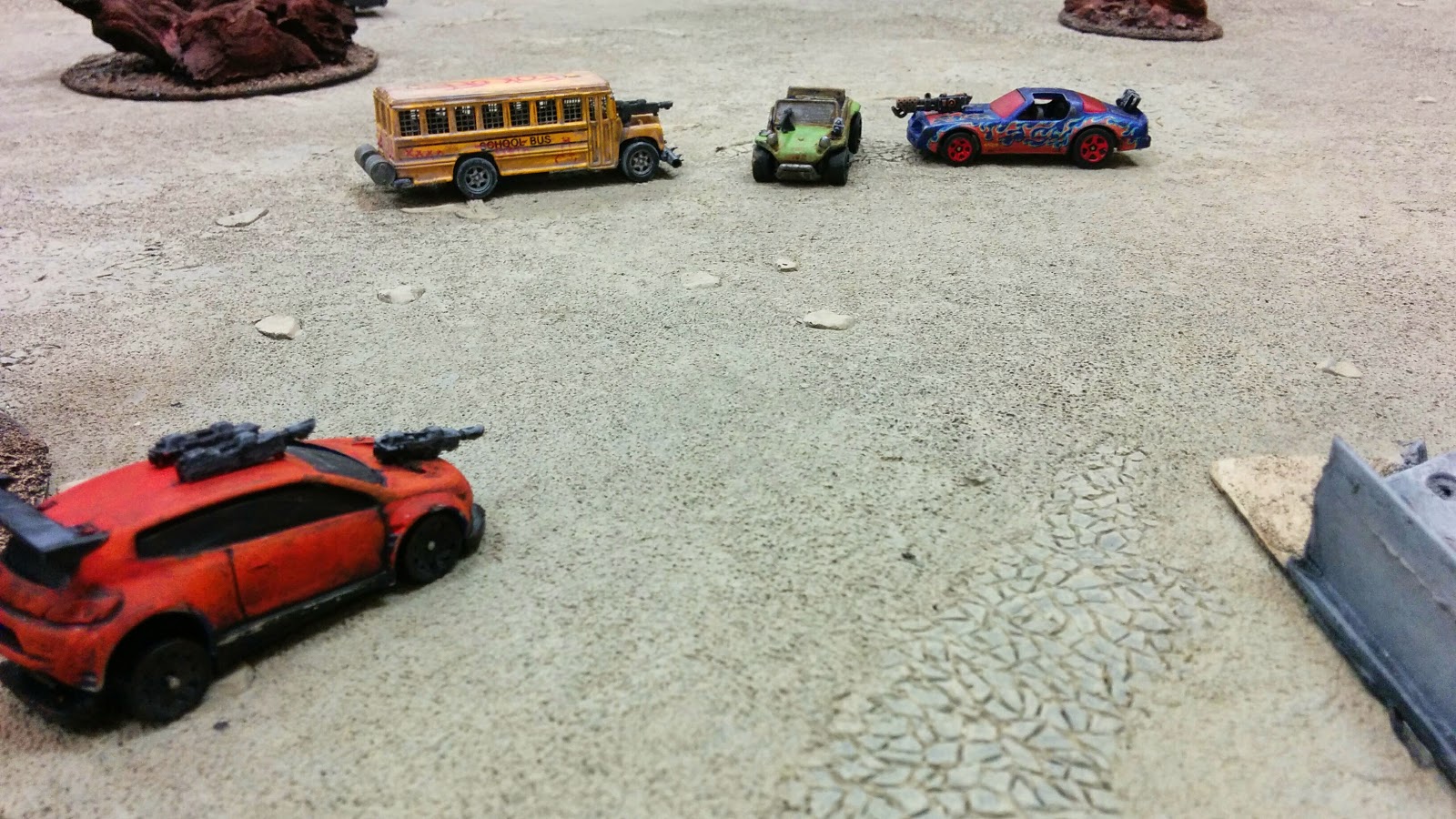 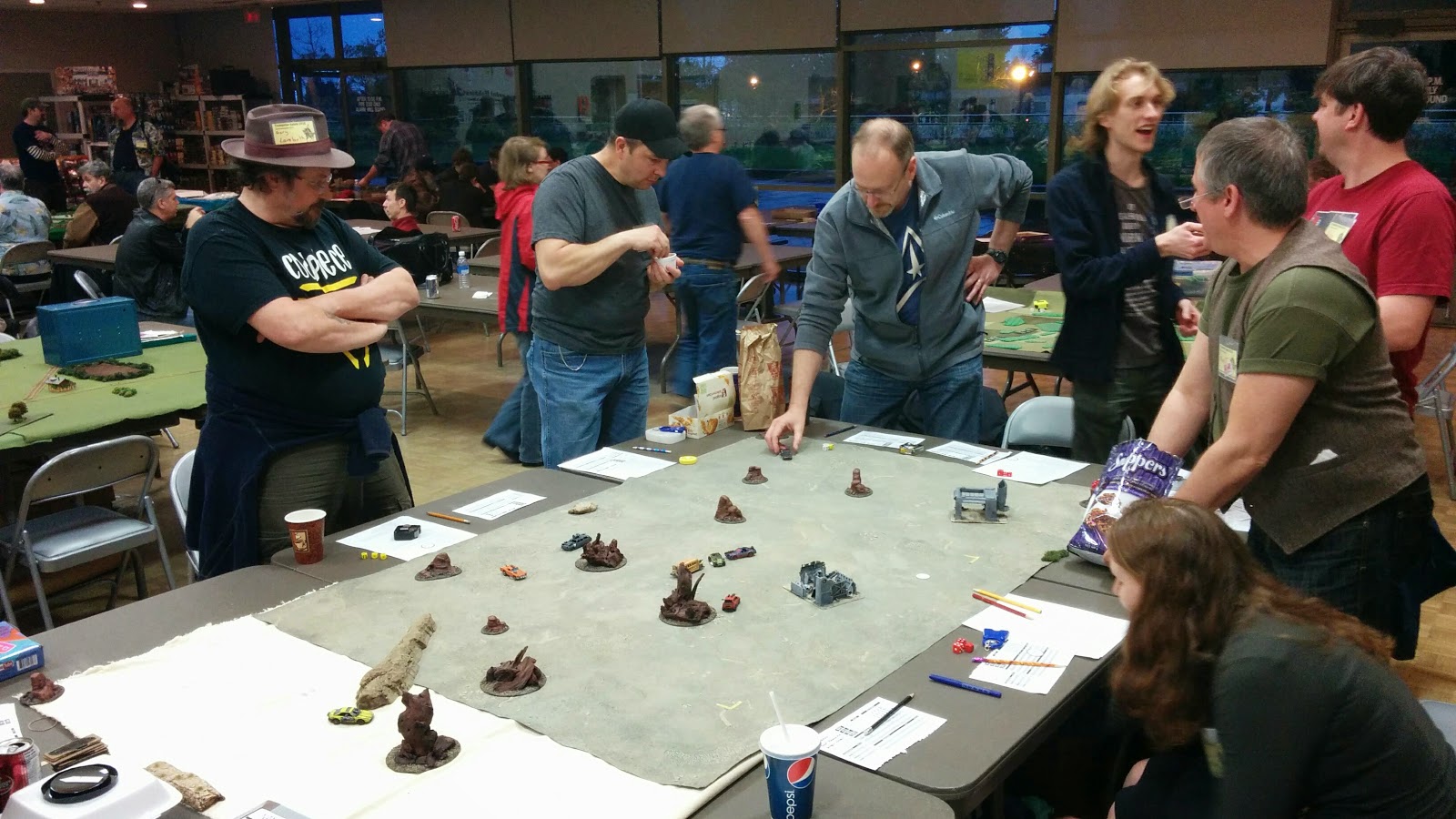 Axles & Alloys is a ton of chaotic, ridiculous fun, and this game was true to form. Dave and Bryan had it set up as a rolling tournament, where if your car was destroyed, you either picked a new one or kept the same one and brought it on again at the start of the next turn. There was a leader board to show who had the most points (kills were worth 2, assists were worth 1), and who had died the most times.

Our table was probably the noisiest, even out-shouting the chariot game next door. I managed to get one or two kills and only died once before I had to get up and cash out my bring-and-buy stuff. It seemed like everybody had a great time smashing and shooting each other to bits.


Salute again featured a Bring-N-Buy area, where people could unload some of their unwanted gaming gear. I was able to clear out some stuff of mine that I don't think I will ever use, and I made enough money by doing so that I was able to load up on the always-amazing Pulp Figures miniatures - my Pulp Alley games may see reinforcements from German Zeppelin troopers, Gasmask Cultists, and even more She-Wolves Of The SS. I also bought one of Bob Murch's Breadfruit Queens, which is a figure he's selling by donation to plant breadfruit trees in areas that need them, and I got one of the forthcoming Huron figures in my grab-bag.

As I mentioned earlier, I won a gift certificate to Imperial Hobbies. Imperial is always a great sponsor of the club and the convention, and very involved in the gaming scene. My prize was sufficient to get me a copy of Dead Man's Hand, a set of Western miniatures rules. I have enough figures to do a game, I've just never had rules to play with. I think it would be a lot of fun to do a Western-themed Quar game in the future too!
Posted by cam at 11:59