This is a Bearded Dragon, in 1800mm scale, that I've been working on for a few years now. I think it's turning out pretty well. 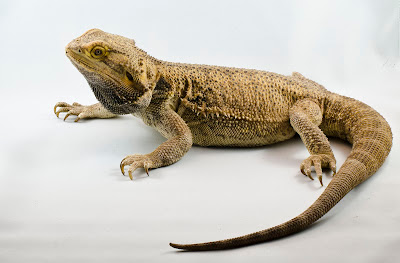 Before tackling another section of paras, I decided to paint up the pack of specialists in case I need a sniper or mortar for a game of Operation Squad. They turned out fairly well, I think: 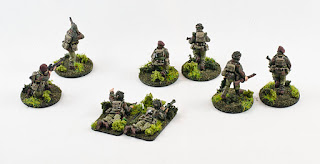 Again it's hard to see the camo in their Denison Smocks... I need to figure out what's going on with my photo pipeline and try to make it more visible. I'd rather be painting miniatures than doing that, though, so it may be a while. 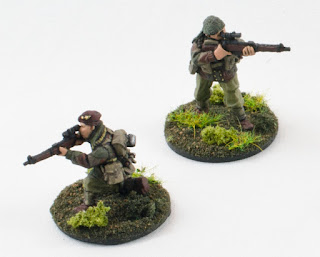 I have two snipers, two mortar men, and two PIAT teams. That may seem like a lot for the scale of battles I'm planning, but the scenarios I'm working on in the Skirmish Campaigns book call for all these, and more, so it isn't a wasted effort.
Posted by cam at 22:23 3 comments:

Company B German Softskins and AA

I recently ordered a bunch of German softskin vehicles for my Red Devils campaign project. I've finished painting the vehicles and drivers, though not all the crew for the AA.

The quality of the casts is mixed. First, the great: 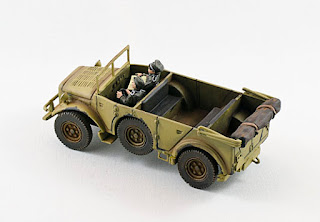 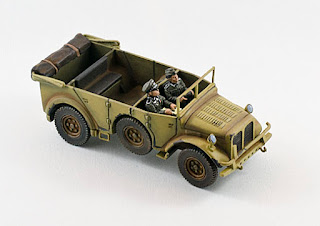 The Horch staff car, as I mentioned in a previous post, was a really nicely cast kit. The resin body was really nice, and the rest of the parts were above average. I took it easy on the weathering powder with this once, since it was such a clean model.

Next, the pretty good: 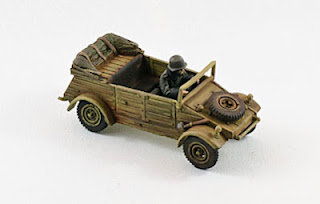 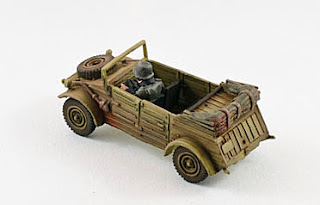 The Kubelwagen is a nice model. The resin on the 'wagen is really thin in places, especially at the doors... you can see light through it, and it feels like it will break if squeezed too hard, which is troubling since that's the natural place to pick up the model. Overall, though, it's a really nice kit, although the driver and machine-gunner (not painted yet) are wearing winter greatcoats, which doesn't really fit with the rest of my minis. 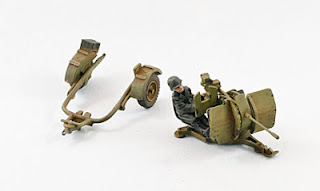 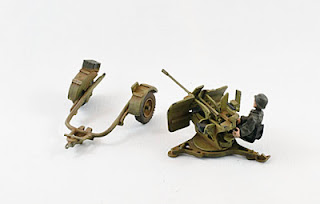 I like the 20mm FlaK gun, though with some reservations. First, it came as a small bag of parts, with no instructions on how to assemble it. I had to do quite a bit of digging on the internet to try to figure out what went where. Second, the barrel of the gun is soft pewter, and I don't think it will last long. It bends very easily, and as we all know, thin bits on our metal miniatures have a finite number of bends in their lifetime before they break. Eventually I'm going to have to replace it with brass or something, I guess.

The crew figures that come with the gun are a bit goofy-looking, with oversized heads of the sort you sometimes see in 15mm FoW miniatures. They have decent enough detail though. 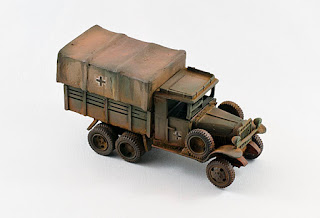 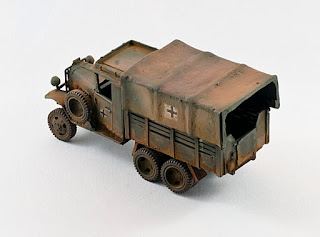 In fairness, the Mercedes truck looks decent enough when it has been painted and weathered, but the resin model itself was really rough. There was a ton of flash, especially in between the narrower bits of detail, like the boards on the bed and the engine grill. In other places, there were terrible pits, like at the bottom of the truck bed. The canvas top of the truck is a combination of both of these problems, pitted and full of flash, just a pretty ugly cast in general. And the four sets of double wheels for the back of the truck were mismatched: I got 3 of one kind and 1 of another, which didn't fit on the axle post. So it turned out pretty well, but I had to cover up a lot of pretty nasty flaws with creative painting and muck. I suspect the mould needs to be retired or refigured. It was a bit disappointing.

Overall, I am pretty happy with the Company B models. The quality is very inconsistent, with one very well cast model, one quite poorly cast model, and two in between. I would buy from them again, but only if there were no equivalent models available from Warlord or JTFM.
Posted by cam at 22:17 No comments: