I had another game of Axles & Alloys yesterday, this time with five people. I was driving the school bus, Bryan was driving the van with the buzz saws, Dave had the fire truck (which he equipped with a flame thrower... fire truck indeed), Mattie had her little convertible with the bat wings, and Ryan had his crazy evil hot rod.

The game took a lot longer with this many people, but it was still fun and it didn't feel like it was dragging at any point. Mattie had never played any sort of miniatures game before, and she was the last one to die. There were some epic and exciting moments, with multiple crashes, cars zooming around on fire, people machine-gunning each other left and right, and traps laid all over the table.

My game buddy Brian found a free set of rules for post-apocalyptic car battles called Axles And Alloys. We had two games a couple of weekends ago, and it is really fun, with lots of high-speed mayhem, guns, rams, and drifting around the table. I bought a few Matchbox cars to convert, and Bryan gave me a school bus. Last night I had a go at converting the bus, and here's the result: 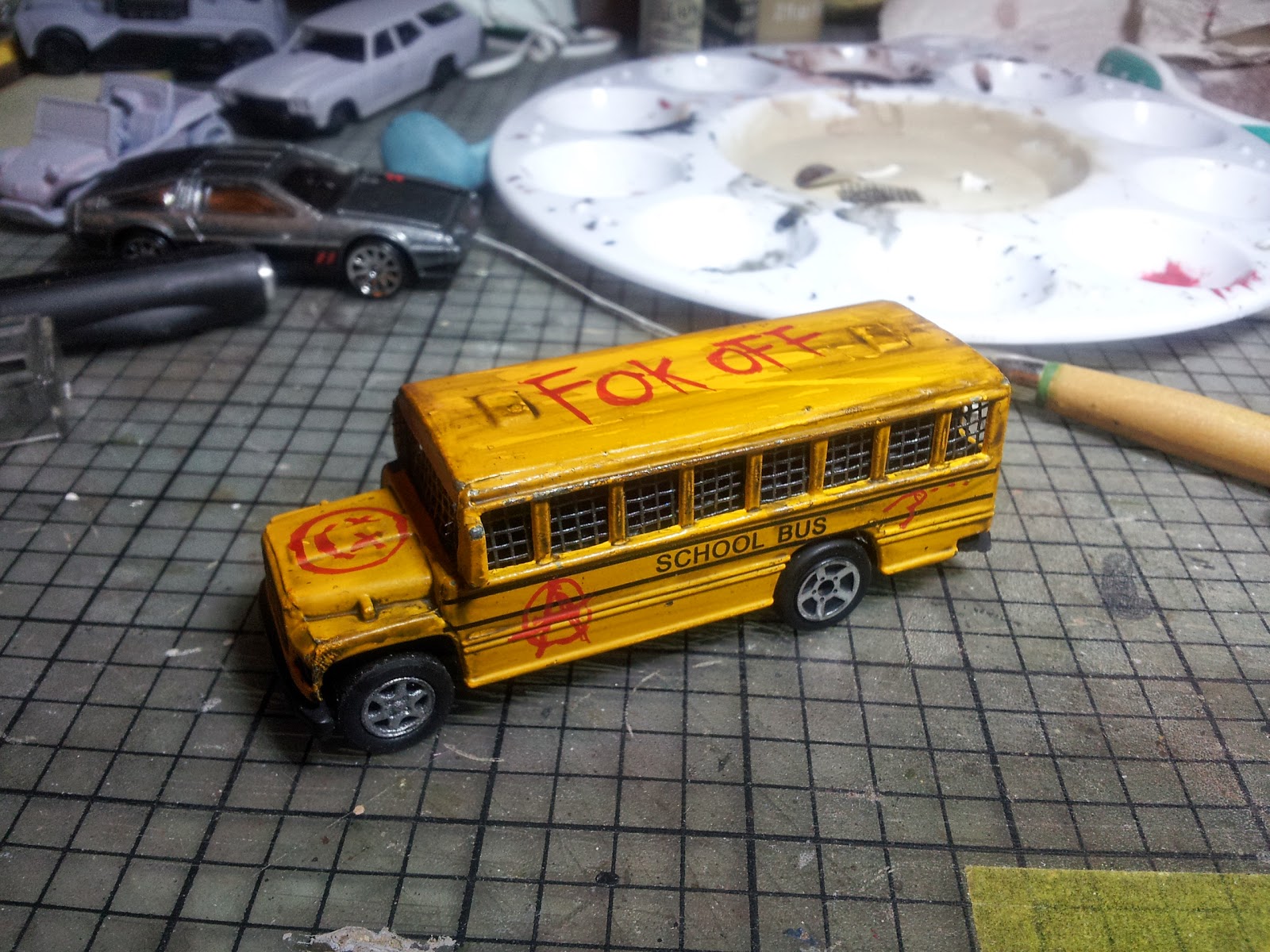 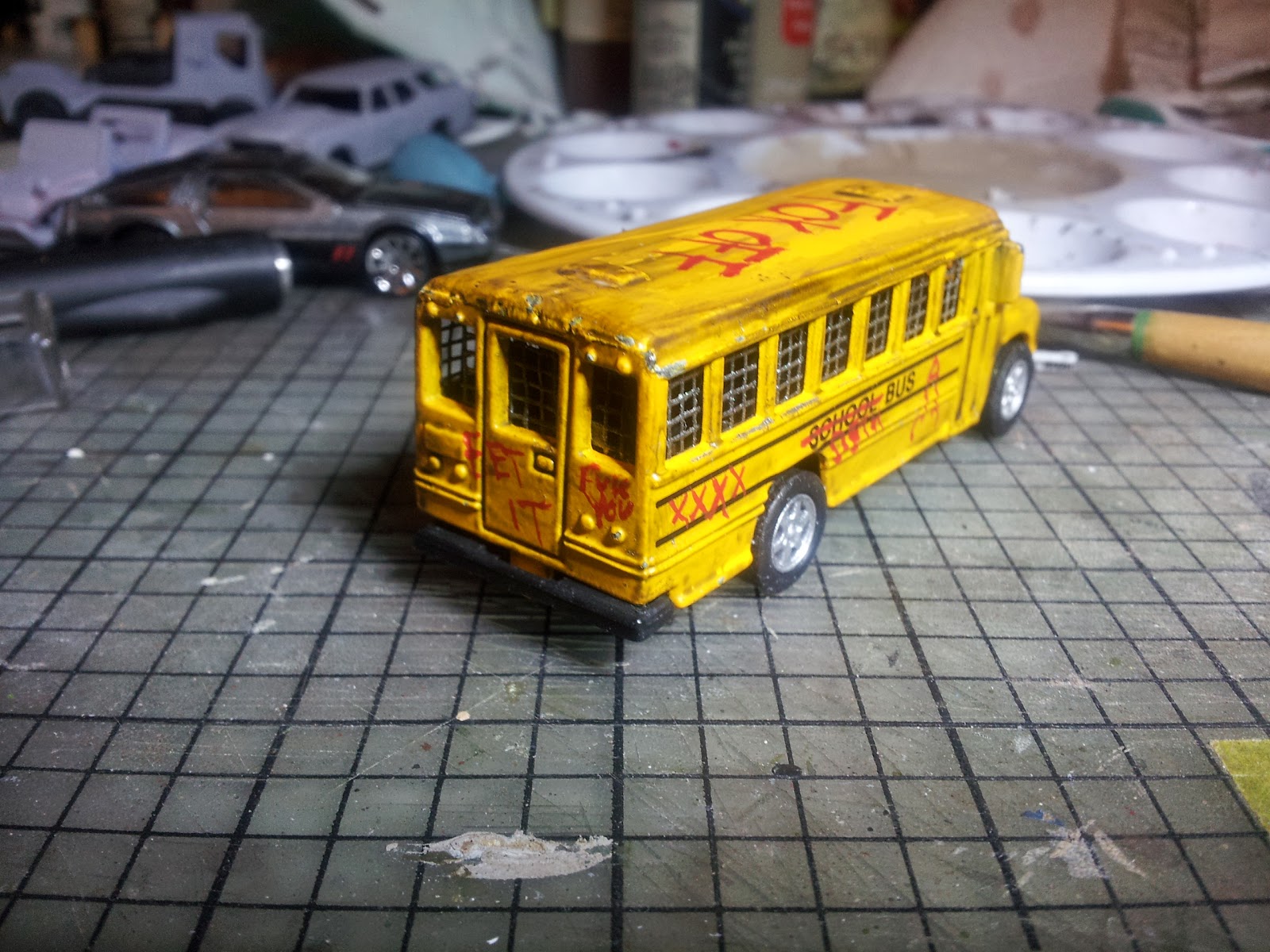 It still needs some work - more dirt, spikes, armor plates, and some guns - but I think it's a good start.

Last weekend I attended the yearly game convention of the Trumpeter Society in Burnaby. I attended Friday night and all day Saturday, but skipped out on the Sunday session.

Attendance at the games I hosted was disappointing: I had one player for my Quar game on Friday, and none for my Clay Havoc game on Saturday. Even so, I was able to get in some fun games throughout the weekend.

We played the Double-Cross scenario from the book, which has the game start with an exchange of pigs for weapons, and ends up in a full-blown firefight.

The good chaps from Pulp Figures hosted a game  that started late on Saturday morning, which worked perfectly for me, since I arrived late. The scenario featured an archaeological party on Venus besieged by rampaging lizard people, and a detachment of British colonial troops and Canadian militia sent out to relieve them.

At that point I had to pack it in and get ready for the Clay Havoc game I was set to host, so I left the battle unresolved - but things were looking good for the humans.

Nobody (except my wife) had signed up for Clay Havoc, so after a few minutes of waiting I went looking for something else to do. David from Kingsford Miniatures was running games of Ronin, with miniatures from his company and a scenario based on the movie Ran, and I was able to jump in on that.

I was playing the defenders, and I had two groups of enemies to contend with. I played a fighting retreat and by the end of the game things were looking grim, but despite being outnumbered the enemy still hadn't made it into the castle.

The White Rock Gamers always put on some amazing games, and I was excited to play in their version of Cannae, the famous one-sided slaughter of a Roman legion by Hannibal in the 2nd Punic War.

I played as the Romans, with the center of the line my area of responsibility.