I had some friends over for a game of Force On Force last weekend, ostensibly to play test one of the scenarios I have planned for Trumpeter Salute, but mostly to give myself a refresher on the rules before hosting two public games. We played Bomber In The Bazaar, from the Operation Enduring Freedom source book, somewhat modified to make it a bit more winnable for the Coalition forces. As it turns out, the game was still really hard on the Coalition - I'll have to adjust it a bit more to make it fair for the tournament.

Here are a few random photos from the game.

I was able to get my hands on some clear white LEDs and a AAA battery holder, so this afternoon I wired everything up and finished the electronics part of my CHOMPBOT build: 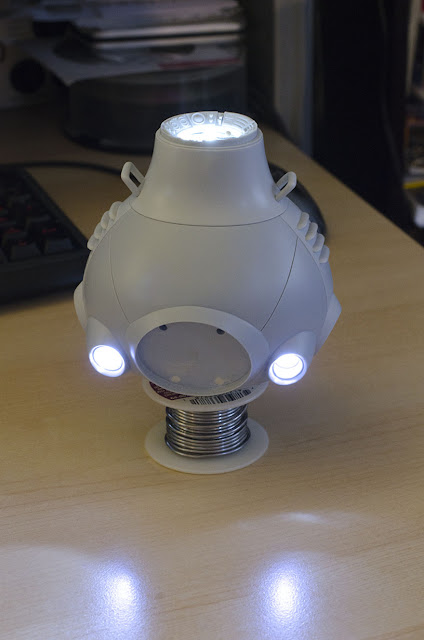 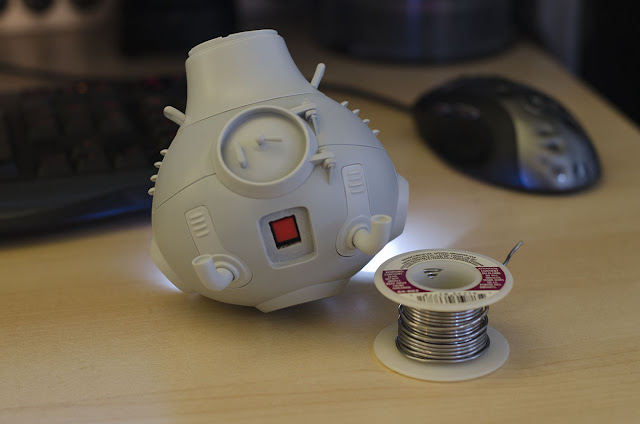 The red square is a push-button switch for turning the lights on and off.

I have all the parts sanded and ready for assembly, but I need to get some styerene rods to use as the pins in the hinges of the CHOMPBOT's knees, ankles and elbows. Once that's done I can dry-assemble the whole thing, make sure it all works, and then start painting.
Posted by cam at 17:49 No comments:

After finishing my Tiger I wanted to do another scale model, but I wanted to do something a bit more light-hearted, and not as grim as another war tank. After some searching around, I found the CHOMPBOT at the Industria Mechanika site. It was one of many, cool models available there (and only one of the two I bought... more on the second one, some day in the future). It is silly and super cute and I expect it will be a lot of fun to make.

I started construction a few days ago. It's a resin model and there are a few small flaws in the cast, but nothing too bad, mostly mould lines.

There is a series of posts on Industria Mechanika following one modeller's progress with building his CHOMPBOT. He drilled out the two front lights and installed LEDs. I think I'll do the same, but I also thought it would be cool to add some recessed lighting under the control panel in the cockpit.

So today I went to Lee's Electronics and picked up some 1.8mm LEDs and a few other bits (which I later found out were not the right bits, so back to Lee's I will go next week). This evening I spent some time drilling and filing and soldering, and finally just installed the lights and tried them out. It's alive! 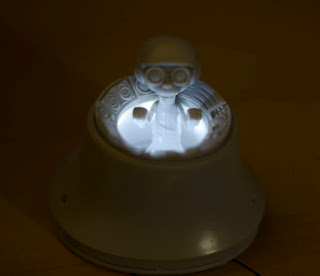 I have 6 white LEDs in there. The lights by themselves were a bit too sharp, so I put in a roll of white paper to act as a diffuser. I think it's going to be awesome when I get everything painted up!
Posted by cam at 21:17 No comments: