This is a project that has been sitting on my shelf for quite a long time. This one isn't strictly game-related, except in so far as the company that makes the models is a game company.

A few years ago the company I work at provided the bulk of the visual effects for District 9. It isn't the largest film we've had a piece of, but it was the first big film where we were the main vfx company working on it. There are still a lot of D9 posters and propaganda around the studio, and the people working there now who were around when we were doing D9 are all fans of the movie and the director.

So, when I saw that Ground Zero Games was manufacturing pseudo-prawns for sci-fi games, I decided I needed to buy some and build a little District 9 diorama for my desk at work. And here it is: 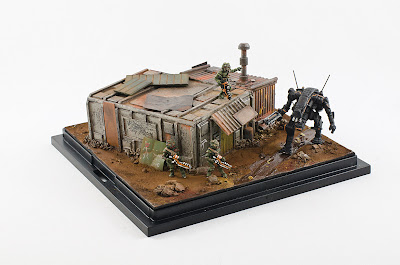 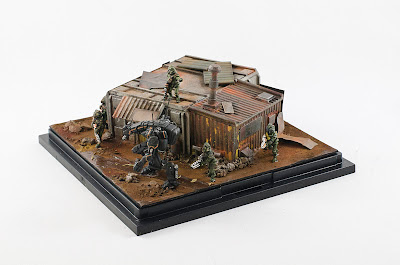 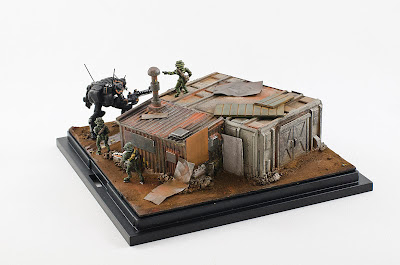 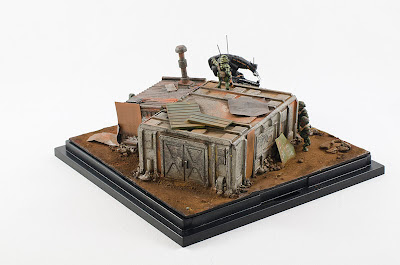 The models are all very nice, though I had to add a lot of plastic card junk to the building to get it looking as crappy as I wanted. I tried some new techniques on this model, mainly with the weathering. I used a hair-spray trick to get the paint to look chipped, and had to redo it once because I used too much hair spray and paint the first time around. It wasn't wasted work, though... the random pieces of yellow paint on the corrugated metal shack are leftovers from that attempt, and I think they look pretty cool.

The company where I work is now working on the same director's next film, so maybe in a few years I'll build a model based on that one...?
Posted by cam at 19:53 2 comments: