I need a variety of Jerry guns for the paras to attack to play through the scenarios in the Red Devils scenario book. The first scenario is built around the attack on the Merville gun battery on the night before D-Day, so I'll need a gun or two to put in the massive casemate... but more on those in a future post. 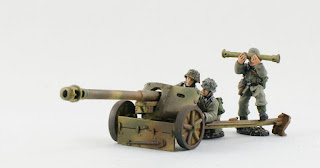 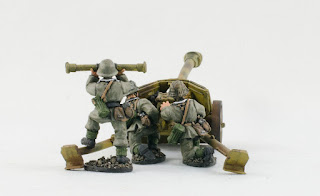 This is a pretty nice mini, but I feel like the gun barrel is out of scale... it's as big around as the crew members' heads. That said, though, the mini is nice and should look fairly imposing as it lobs shell after murderous shell at the Tommies.

I decided not to make a base for this gun because I plan to put it in my fancy Grand Manner trench system. I may still build a base for it.  The figures are unbalanced enough that they have to be leaning against the parts of the gun in order to remain upright, so it would be nice if I could put the whole thing on a solid foundation, but it would have to be a base where I could remove the gun itself, which would be tough... I wouldn't trust Blu-Tac to hold it. 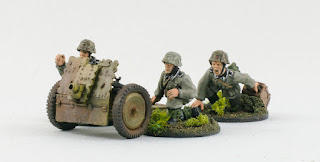 This is a fun model. The gun was fairly easy to assemble (though putting the shields on the four guns I built in the last week all felt a bit sketchy... the connection points are small and I don't know how strong the glue is), and the crew figures are cool - especially the guy yelling his Aryan face off as he pulls his little box. I put the figures on washers and based them as normal, because an infantry gun like this is fairly portable and will probably move around quite a bit, unlike the PaK and the artillery.

As a final note, I wish the Nazis had given the crazy capitalization on their acronyms a rest. Seriously, le.IG 18? Either capitalize everything or nothing. No wonder everybody thought they were dicks.
Posted by cam at 22:24