When you're wounded and left on Afghanistan's plains,And the women come out to cut up what remains,Jest roll to your rifle and blow out your brainsAn' go to your Gawd like a soldier.


Well, it has been a long time since I posted anything. I've been working on a 1/35th scale Tiger, but I ran aground a bit and needed to wait for some new supplies, so I started in on another project that has been percolating for a while: my 15mm Moderns collection. The brass ring at the end of this project, if I have the time and the stamina, is to put together a campaign based on Afghanada, the outstanding CBC radio series about Canadians fighting in Afghanistan.

I have a huge load of Canadians and Taliban for Afghanistan scenarios, and I've been painting like a mad bastard. The miniatures I'm using are about 90% QRF and 10% Peter Pig. All of the figs in this post are QRF. I'm using USMC as Canadians, since they have essentially the same kit.

The QRF miniatures are... okay. They had the range of figures I want, so I'm happy with the selection I have, but some of the miniatures are a little questionable. One of the USMC/Canadian commanders has a large, silly bobble-head helmet, one of the Talib poses seems to have two elbows on his arm and another is holding his AK in a really awkward, strange position, and a lot of the miniatures have very muddy / non-existent faces. A high proportion of the gun barrels are either missing or so thin that they are going to snap off the first time someone mishandles them. All that said, they make for a nice force when they are all painted and viewed as a group.

At 15mm these problems aren't such a big deal, but still, I spend a lot of time on my minis, and it would be nice if I had a bit more to work with (or a bit less to work against). 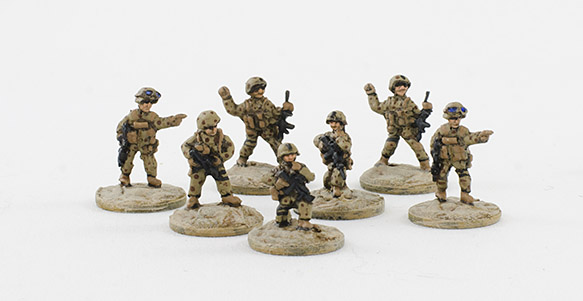 These were the first of the moderns I painted. I tried to add in some brown dots on the uniforms to better replicate the CADPAT-AR camouflage worn by our guys in Afghanistan, but I don't think it worked out... I will probably paint over the khaki / tan parts of their uniforms to cover it up.

I have enough painted minis now to play some games. All I need now is for my buildings to arrive from Gamecraft and my new battle mat to arrive from Zuzzy and to build some other terrain bits, and I'll be ready to go.
Posted by cam at 20:12