This is a figure my wife picked up at the last Trumpeter Salute convention, almost a year ago. I got some other minis from the same manufacturer and picked up a copy of his rules after trying a demo of his game, Strange Aeons. The figures he had looked great so I picked up a few packs. After getting them home, though, my feelings were a bit more mixed. The figures are cast in super tough lightweight resin and the monsters are mostly pretty good, though the detail is pretty rough. The humans (agents and cultists) I got were fairly shabby, unfortunately. The detail is rough, and the quality of the sculpting is fairly low. The cultists, for example, look like they were carved out of wood; the folds of their clothes, which should be soft and rounded, are hard-edged and angular.

Anyway, my wife bought this figure but never got around to painting it. She still thinks the mini is cool, but she's much more interested in spinning and knitting than she is in painting figures, so she asked me to paint it for her so she could use it as a "hood ornament" for her spinning wheel. It only took me two evenings, and despite my complaints about the sculpting I think it looks pretty rad when it's all painted up. I used clear gloss varnish on it to give it a bit of a slimy, snotty appearance. 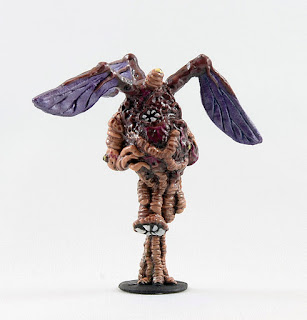 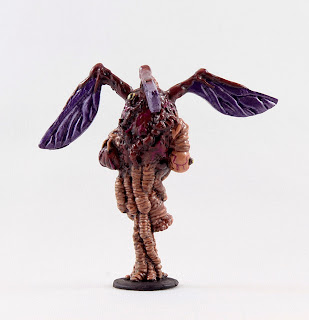